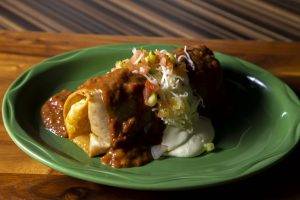 CHIMI CHIMI SHAKE! The chimi’s story starts with a burrito, when we accidentally dropped a meat filled burrito into the fryer and discovered a whole new way to serve this iconic item. What came out of the fryer that day was a crisp, savory burrito that became a legend in its own right.

Seeing we had something special on our hands — or plates — we topped the concoction with our zesty Relleno sauce, sour cream and fresh Pico de Gallo. The reception was massive, with Phoenix diners clamoring for this novel culinary creation. Over the years, we have perfected and innovated our chimichanga, filling it with a wide variety of flavorful meats, cheeses and serving it to our guests all around the Phoenix area.

Now we’re putting in your hands! Build Your Own Chimi for $10! Select all of your favorite options!

CHIMI HISTORY
1946 Macayo’s Opens in Phoenix
– The legendary Macayo’s restaurant is founded and becomes a staple of Phoenix’s dining scene for three-quarters of a century
1946 A Timeless Classic Gets a New Spin
– Created by accident when Macayo’s dropped a meat burrito into the deep fryer at the restaurant in Phoenix, the chimichanga becomes a staple of Mexican restaurants the world over
1968 The Mini Chimis Join the Party
– Not satisfied with simply creating an iconic dish, Macayo’s introduces the Mini Chimis, bite-sized versions of their classic chimichangas
2009 Here’s to the Chimi
– Chimichangas are among the most popular dishes at Mexican restaurants like Macayo’s and they attract the attention of the first family – President Barack Obama orders a signature chimi while celebrating his daughter Malia’s birthday at the Macayo’s Central location in Phoenix
2010 – 2011 Check “Yes” for Chimi
– Public referendums are rarely this tasty but during this time Macayo’s leads an effort to have the chimichanga named the state food of Arizona
2020 National Chimichanga Day is Launched
– Every day is a good day for a chimichanga but to give this dish the recognition it deserves, Macayo’s starts National Chimichanga Day
2021 Guinness World Record!
– Macayo’s sets Guinness World Record for Longest Chimichanga on September 25th in Phoenix, AZ with a chimichanga 25ft 7in long and 1,200 pounds