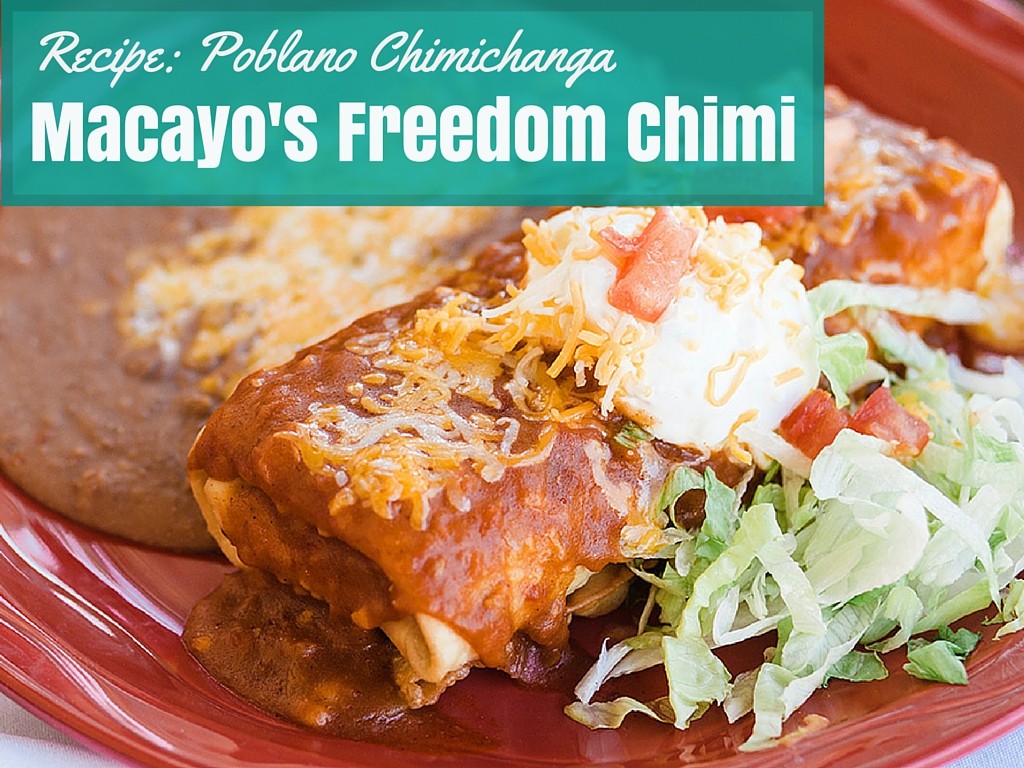 It’s that time of year again when we celebrate our annual Chimi Fiesta! During this celebration, we have a specialty menu that’s full of both new and classic chimichanga dishes. And considering it was our very own founder, Woody Johnson, who first invented the chimichanga, we’re take this celebration pretty seriously. For those nights when you can’t make it out to Macayo’s but are craving a delicious chimichanga, we’ve decided to provide you with a recipe for our popular poblano chimichanga (Freedom chimi) below.

Of course, we do recommend making it out to Macayo’s to order this for yourself during our Chimi Fiesta; after all, we’re donating a dollar for every Freedom chimi we sell to the Helping Hands for Freedom organization.

Here’s what you’ll need for this delicious chimi recipe:

Assembling the poblano chimi is easier than you think! Once you have all your necessary ingredients, get started by placing the sliced poblano along the center of the flour tortilla. Then, spoon the five ounces of chicken on top of the poblano before rolling the tortilla, burrito style, so that it’s closed at both ends. Since you’re going to be frying the chimi, you’ll need to be careful to seal the ends off so none of the filling spills out during the frying process!

If you have a deep fryer, now is the time to get it going. If you don’t have a deep fryer, no worries; you can heat your choice of frying oil in a large pot and yield the same results (just be careful not to overheat the oil you’re working with or burn yourself). Place the rolled up chimichanga into the fryer basket and lower it into the heated oil (or carefully place it into your pot of oil), folds down. Prevent the chimi from opening up during frying by placing a flat hold down on top of the chimi itself. If you’re frying in a pot on the stove, you can use a spatula to achieve the same results, but we recommend wearing an oven mitt while doing so to protect yourself from splatters.

Once the chimi is nice and golden brown, remove it and set aside to allow any excess grease to drain from it. Meanwhile, spoon the beans mixed with cheese onto a plate and run it through the oven to warm it. Then, remove the plate from the oven and place the chimi on the plate, topping it with the red enchilada sauce baja sauce, Jack cheese, and tomatoes. Garnish with the lettuce, some remaining tomatoes, and blue tortilla strips for a beautiful dish that tastes just as good as it looks.

There you have it, our very own Freedom chimi that you can serve up at home. Give this recipe a try the next time you’re in the mood for a crispy, flavorful chimi. And don’t forget to stop by during Chimi Fiesta!